WHAT CAN WE DO?

Four actions related to Palestine and Israel, including the one we passed at our RMS assembly in May, "No Way to Treat a Child" (see below). Time now to write to our elected officials, especially Members of Congress, where they have an opportunity to co-sponsor Rep. Betty McCollum's bill, H.R. 2407, "Promoting Human Rights for Palestinian Children Living Under Israeli Military Occupation Act." (see "Take Action" below) 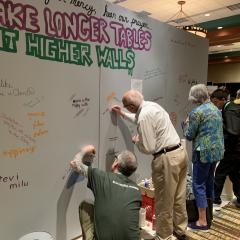 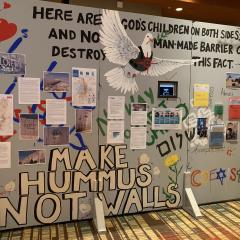 The Thomas Mass is a Lutheran worship liturgy designed for contemplation, prayer, and questioning. It is named for the Apostle Thomas because of his questions in faith. The bulk of this service is an Open Phase during which worshippers are invited to participate in different worship stations as they feel compelled. This particular Thomas Mass has been developed by the Rocky Mountain Synod’s Peace Not Walls committee.  The service may be adapted for use throughout the year in various worship settings.

Read a FACT SHEET about the two memorials.

WHAT IS PEACE NOT WALLS?

In the Rocky Mountain Synod, we participate in a special ELCA campaign working for justice and peace in Palestine and Israel, through

Peace Not Walls connects us with our Palestinian Lutheran companions—promoting dignity, full respect for human rights, healing and reconciiation. With our companions in the Evangelical Lutheran Church of Jordan and the Holy Land (ELCJHL) and the Lutheran World Federation (LWF), we also accompany Palestinians and Israelis, Jews, Christians and Muslims working together for peace with justice. Learn more about the ELCA campaign.

Some other ways you and your congregation can be involved:

2018 Synod Assembly Resolution: No Way to Treat a Child

No Way to Treat a Child FACT Sheet

History of ELCA Engagement with Israel/Palestine

Action Alert - No Way to Treat a Child
Resources:

Fact Sheet - 2019 Memorial to Churchwide Assembly: No Way to Treat a Child

Summary of 2016 ELCA actions on Israel/Palestine

Some resources and links for your congregation to study the issues and implement the resolutions. Members of the PNW working group (listed below) are available to help you plan.